Canvas Wall Tent Fabric: Everything You Need to Know

Canvas Wall Tent Fabric: Everything You Need to Know

Understanding the Use of Cotton Canvas for Wall Tents

The fabric used in wall tents makes all the difference in terms of weather resistance, durability, breathability, and temperature control. While some fabrics are light and airy, others are heavy-duty and potentially stifling.

Choosing the right fabric for your wall tent will ensure that not only will everyone be well protected from the elements, but also that your wall tent will provide the most comfortable and enjoyable space possible so you can reconnect with your loved ones in style.

Wall tents are made of either a man-made material, usually nylon or polyester-based, or of a heavy, woven type of a cotton canvas fabric. While some options come at an affordable price for most, others may cost more but will shelter you for years to come.

Each choice of material offers its own benefits and downfalls, and each has variables that can be adjusted to be the best for every person and situation.

What is a Wall Tent?

A wall tent is typically a tent with four vertical walls, which are what lend the tent its name. Wall tents, because of the space and durability they offer, are usually used for hunting groups or in more recent times, for glamping. For this reason, wall tents are also known as outfitter tents or safari tents.

Cotton canvas tends to be the fabric most often used for wall tents because of its breathability, durability and resistance to harsh weather conditions. White Duck's canvas wall tents also have built-in stove jacks, which makes them suitable for use as 4 season tents.

We just released a Product Review video of this 16'x20' Alpha Wall Tent by @whiteduck_outdoors - check out what @garth_jenson says by heading to our YouTube channel at the link in our bio! This was also featured in our June 2020 magazine issue after @aaaoutdoors spent some time in the field with it. Both Hunt Advisors have some awesome things to say about it! #HuntinFool #BuiltToHunt #WhiteDuckOutdoors

Cotton is a natural material that has long been used by outdoor communities to create everything from sails and tents to backpacks, hammocks, and clothing. Durable and breathable, cotton has withstood the test of time due to its many natural benefits.

Army Duck is a special double fill canvas, meaning a doubled thread is used to create a tight and strong weave that meets U.S. Army specifications. It's considered to be the highest quality canvas available, a medium-weight canvas made with a tight weave to create a smooth fabric.

In simple terms, army duck canvas is considerably more durable and reliable than regular cotton or polyester canvas. This makes it more ideal as a material of choice for tents that are intended for extended outdoor use.

The entire range of White Duck tents is built from army duck cotton canvas - the fabric allows for a sturdier, more durable build while still reaping the benefits of regular cotton canvas, like breathability and a natural aversion to UV radiation. 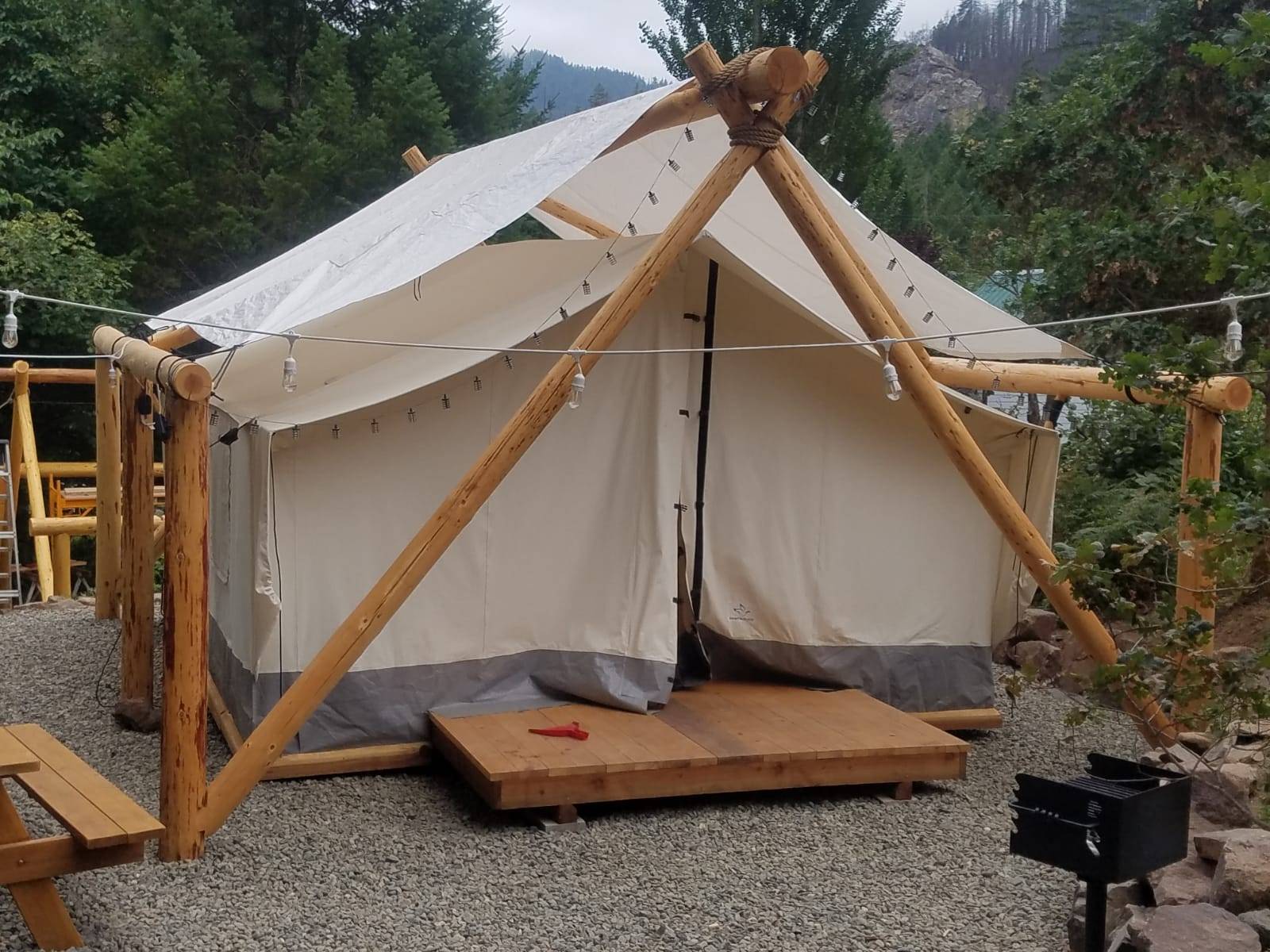 The advantage of canvas as a material for wall tents is that it can be treated to help it last longer, especially after use for extended periods outdoors with outfitter groups or at glamping sites.

When you invest in a wall tent, the fabric should come treated for water repellency, UV resistance and mold & mildew resistance.

The Difference Between Waterproof, Water Resistant and Water Repellent

A Paraffin finish may be applied to tents for water and mildew resistance but, due to its heavy nature, tends to add significant weight to the tent. Anti-mildew treatments keep the cotton canvas from mildew damage after exposure to damp conditions, which helps preserve the tent for much longer. Depending on the extent of damage by mold, there are a number of ways to clean the canvas tent of mold and mildew. Generally, untreated canvas tents tend to shrink 10-15% after getting wet, which can affect their performance in the longer-term.

Wall tents are generally four season tents and tend to be used for extended periods of time, which also means stoves, heaters and AC units are often used inside them. This is why choosing a tent that’s been treated to be fire retardant is critical. That being said, a canvas wall tent is not fireproof and thus shouldn’t be exposed to a flame for long.

White Duck's tents use a special chemical treatment that, while ensuring water repellency, still maintain the breathability of the tents. As part of this process, we also treat the tent for protection from rotting and accumulation of fungus. 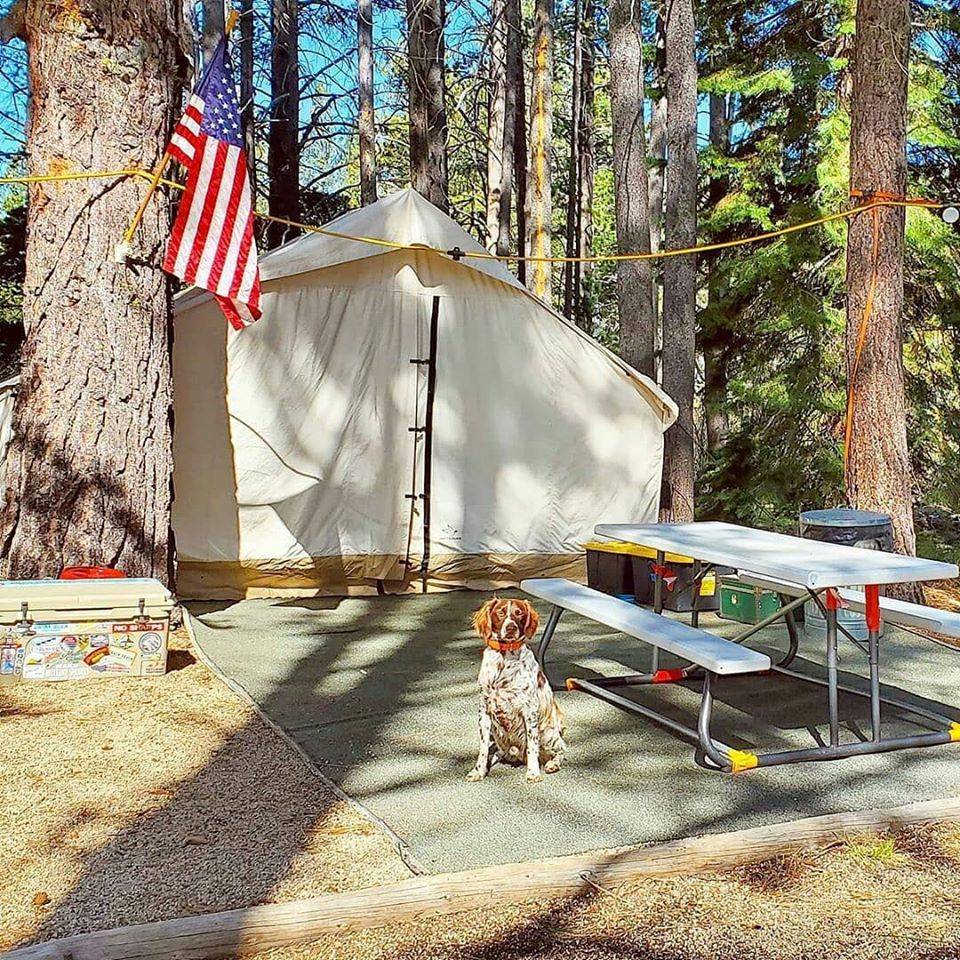 Canvas fabric for wall tents usually comes in 8.5 oz. or 10.10 oz. options. The weight of the canvas primarily impacts the overall viability of the tent for use as a semi-permanent outdoor shelter. In either case, the fabric needs to be well looked after to ensure its longevity and lifespan.

Synthetic materials have grown in popularity over the years and are easily found on store shelves. Nylon is a man-made material that is commonly used for backpacking tents, but is not as heavy-duty as other options and is best kept on a small frame or used as accent pieces. It is thin and lightweight and is prone to rips and tears particularly when used for larger panels.

Polyester is another man-made material and is the most used tent material found on the market. It is far more durable than nylon and would be the preferable choice of synthetic materials for larger family or wall tents, but is still of a more lightweight than cotton canvas tents. The quality of polyester can vary though, so always be sure to check for elements such as thread count, waterproofing, and denier. 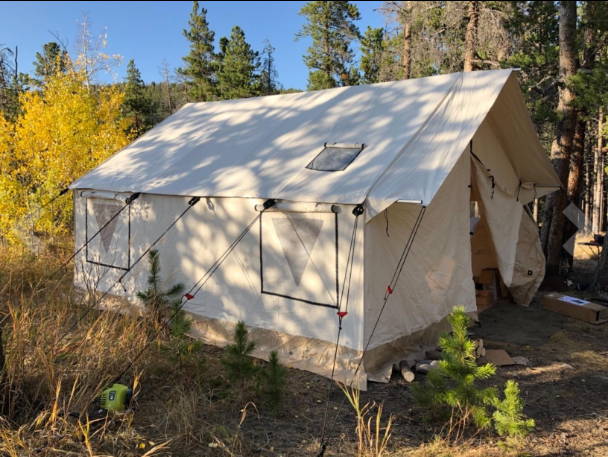 Wall tents made from high-quality cotton canvas are a great choice to use over and over again in any season and for many years. When looking to invest in a wall tent, in addition to the fabric, it's important to consider the treatments that have been applied, frames and sizes to determine what makes the most sense for your trip.

At White Duck Outdoors, we use only uses premium 100% cotton canvas fabric with a premium silicone treatment for all wall tents. Our 10.10 oz. double fill Army Duck fabric creates durable, light-weight, and breathable tents, while high-quality at a competitive price makes these tents ideal choices for any type of use or occasion.

Enter your email and be the first to know about new products, promotions and inspiration for the outdoors.